Our third local map campaign. It was inspired by the Lustria book which was released at the time, but very few of the rules were taken from that book. Instead the rules were based on the previous map campaign rules. A major change from the previous version was that the option for team battles was greatly reduced after this had proved to be a major problem with the Reclaiming Nordland campaign. To keep some sort of option of multiplayer battles, players could transfer up to 600 pts from their own army to support another army, though this cost you resources to do. Further options were also included to get more interaction between realms that were further apart, with fleets being able to transport armies along the coast or along rivers.

Another problematic area in the previous rules was that wounded characters quickly became a burden and so the option for one-off characters that could not suffer long-term injuries (but also not gain advances) were added in. Still, book-keeping for characters was time consuming and in hindsight probably not worth the effort.

Previous campaigns had not really had much of a theme; that is to say, they had no special rules that tied them in to the background of the campaign in any way and the Nordland campaign set in the Empire could just as easily have taken place in Bretonnia. This time, however, there was a small supplement to the scenario generator for fighting battles in Lustria and that was based on the Lustria book, with events, encounters and some other special rules. These started off relatively similar to the ones in the Lustria book, but it quickly turned out that some of them were wildly unbalanced (one encounter removed D6 models, which was rather harsh for single, very expensive models). The result worked quite well and I am very pleased with it.

This campaign also saw us use hexagonal polystyrene tiles to make up the map, instead of the previous printed and glued tiles. These gave us a real texture to the map and looked very nice, though getting the tiles to all be more or less the same size and shape was a bloody pain. 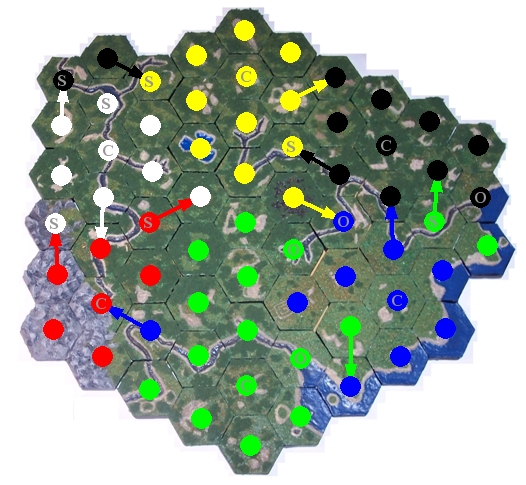