Our second local map campaign. The rules were extensively reworked and stayed fundamentally the same for the two following campaigns too. One major improvement to this was that players started in contact with each other (there were no neutral tiles on the map), which meant that there was no idle time at the start of the campaign where people went around and claimed neutral territories instead of attacking other people and actually fighting battles.

The campaign also did away with features in territories after the previous season's nightmare of trying to keep track of them all. Instead, the character advancement section was developed further and you could now get advances and injuries for characters other than just the general, which was more than enough book-keeping in itself.

The major flaw of this rule set was the rules for team battles, which did not work (I don't think we have ever had a good set of rules for handling team battles in campaigns). They were much too powerful and when players figured that out, battles became very dull.

A further advancement you can see in the picture below was the construction of a database for the campaign. This was read by a PHP-script which then drew the map automatically. The system worked so well that it has been used in all later campaigns with only slight modifications. 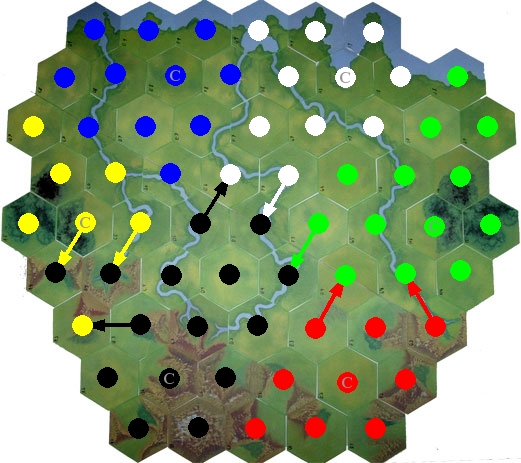